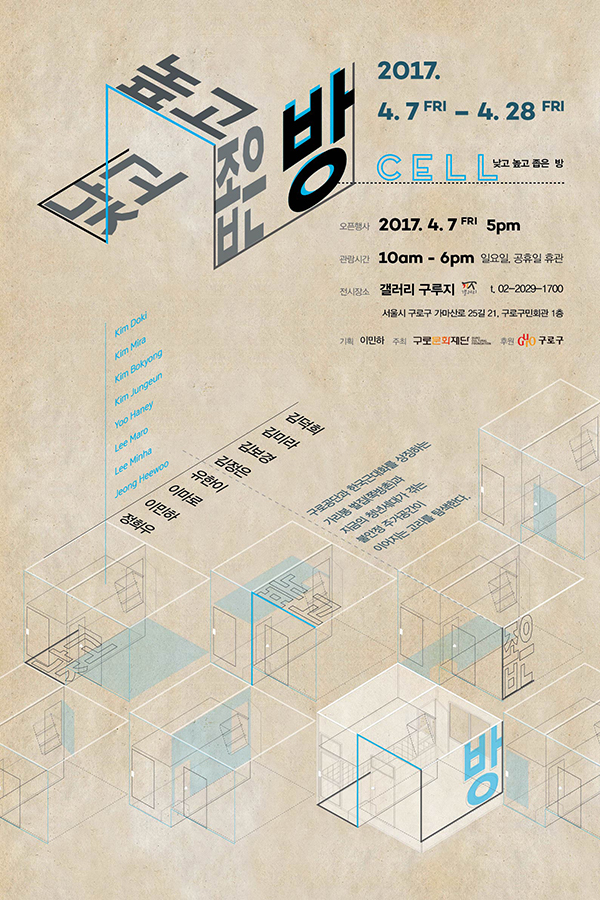 The colorful signboards occupied by the Simplified Chinese and the narrow, winding alleys, gave me, who was used to skyscrapers and landscape of apartment forest, the impression of visiting a small city in China. As a na- tive of Seoul, I was exposed to Garibong through a history tour of Guro Industrial Complex that was conducted for local research on community based art project with Guro residents in early fall of 2014.

1970s were growing period for Garibong with huge engine called Guro Industrial Complex, fueled by youth and dreams of young people who had just arrive in Seoul from the countryside. Burjip came into existence for tired workers who could not be accommodated into the factory dormitories. Burjip of Garibong were multi-unit dwelling, each unit with a narrow room, a low kitchen, and a long, narrow loft.

Burjip of Garibong, where the young factory girls grew their dreams working on sewing machines and going to night schools, declined in the 1990s along with Guro Industrial Complex. In 2000s, with the influx of Korean Chinese, foreign workers, and elders looking for cheap dwelling, Garibong became a place for them. Currently, even people living in Guro-gu find the place unfamiliar. Continued attention and efforts are necessary to re- member the history of Garibong, which embody the pain of industrialization, and resolve the meaning and value of this place through artistic approach.

The exhibition ‘CELL’ started from a curiosity about Guro Industrial Complex and Garibong Burjip, which sym- bolizes modernization in Korea, and examines the continued links of unstable living spaces, such as Gosiwon, experienced by today’s young generation. The eight artists participating in this exhibition agree on problems that the theme embodies, and through research on Guro Industrial Complex and site visit of Garibong region, unfolds stories regarding ‘Room’ in their own ways.

At the entrance of the exhibition space, various names and chronological tables of unstable living spaces, such as Hakkobang and Roofingjip, are placed. The chronology shows that Burjip, which was created with the growth of Guro Industrial Complex, has structural similarities with Gosiwon, which appeared in the 1980s. Furthermore, it also briefly shows how Gosiwon becomes more and more advanced with the increasing uses by the office workers after IMF. Sequence of the exhibition moves from the works portraying realistic Garibong to innermost room containing more private and intimate works.

Jeong, Heewoo has been working on visualizing small symbols found in the urban space by making rubbed copies. In this exhibition, she enables viewers to estimate the specific structure of Burjip with rubbed copy of an actual Burjip in Garibong, showing size of a room, location of a window and three doors. The door on the left with overly used screen loosely tied is the main passage to the gate. Small door in front to the left, which one has to lower one’s head to pass, is connected to a multi-purpose room, where the floor is lower than that of the main room with water supply. Slightly taller door in front to the right is connected to a coffin-sized narrow and long loft.

The exhibition title ‘CELL – Low, High, and Narrow Room’ is an expression that shows the actual structural characteristics of the room that Jeong, Heewoo made rubbed copies, and at the same time, is connected to the expression of residential problems of the younger generation that a sociologist Jung, Minwoo mentions in his book ‘A Room of One’s Own(2011, Imagine Books)’. He refers to unstable living spaces in the city, which are called in various ways, using adjectives such as low(semi-underground room), high(rooftop room), and narrow(Gosiwon). Even though there have been changes in naming such as Livingtel and Minitel, these spaces were not recognized as homes and remained out of the government’s interest. These spaces, which are difficult to name as one, have been continuously created and neglected.

Kim, Jungeun uses the traces of her walking path to create the one and only map in the world. Through a passenger plane that she encounters by chance while walking around Garibong-dong, she tries to express a journey toward Garibong in the work titled ‘self mapping : Garibong Burjip Flight’. She records the scenery, location, etc. of a place where she encounters the plane, which appears every 20~30 minutes. The present of Garibong is recorded with a subjective and personal viewpoint.

Kim, Mira attempts to identify what human beings can do as an ‘individual’ through visual arts with the use of industrial products and replica images as a medium. Big housing sale balloon placed along with full-colored signboards experienced in Garibong-dong clearly reveals the desire for the residential space in Korean society. The scenery of Garibong, where the historical strata of Seoul seem to have stopped at a certain moment, is broken down into various parts and indirect images and strangely combined with other objects.

Lee, Maro is an artist with mysophobiac and paranoiac tendencies, and represents the characteristics of today’s young generation, who communicate with the world through web surfing. Even though it is difficult to commu- nicate in general, he firmly established his own world, and shows characteristics of a ‘Room’ as an extension of a body. ‘Guro Tour’ is a series of drawings that are drawn on over 30 meters of paper roll with images collected through web surfing. Obsessive, yet bold strokes show a part of him that meets with the world through drawing.

With ‘Sacred and Profane’ as the theme, Lee, Minha visualizes the research on humanness, and at the same time, engages in community based art projects in various regions. The slate roof covered with cement installed at the entrance of the gallery space is a scene of demolition and development at the same time. Borrowing a phrase from Paragraph 3 Article 35 of the Constitution, she recalls the unstable housing spaces that were not captured by the administration’s radar. The room located inside with damp smell of Kongdem walls with tightly transcribed sample questions shows the reality of young generation, who are trapped in a square room.

Yoo, Haney is working on drawing a life that repeatedly changes and disappears through an architectural structure built by assembling small blocks. There exist special stairs that share the middle landing in two Gari- bong Burjips purchased by Seoul city. The artist collects and draws fragmented traces of life in these stairs that face each other. The ‘Each Room’ series emphasize the particularities of Burjip that has different door sizes and structures, and vibrantly express the life when there were dreams and hopes.

Kim, Bokyong has been working on installations that reveals the stories of the time and the events that exist between memory and reproduction. The protagonist of the work ‘The Dim Landscape of Sune’ comes to city with the hope of learning skills and settling in the city with the love. The deep and irregular creases on a surface of the work made by the artist’s labor show exhaustion and intensity of a life that the protagonist had to endure. Canvases in different shapes are times of the scenes facing Sune’s deep reflections, and darkly hung installation calmly reveals the remains that left those scenes behind.

Kim, Doki has mainly been working on installations with heat and light as materials. The artist interprets Guro In- dustrial Complex’s dosshouse village, the symbol of modernization in Korea, as the womb of Korea as motherhood. Rapid modernization in the process of compressed growth. Using the space of womb as a medium for a dosshouse village, an unstable living space, and a passenger ship tragedy of 2014 born in the shadow of rapid modernization, the artist reveals dreams that people in those two spaces would have seen as objet and shadows. When audiences reach the innermost darkroom, they feel as if they are peeking into other’s dreams or returning to the womb.

Each room in this exhibition is a structural device that induces the media of existing works of participating artists to be actively expressed, and reveals the consciousness on social problems that they have experienced and thought about naturally through works. The artists in late-30s and mid-40s, who have seen the benefits of the compressed growth of Korean society, review the residential problems of current young generation and thoughts on ‘Room’ through a filter called Garibong, and apply it in their works. Facing social problems that we encountered by witnessing many ‘Rooms’ that still does not have a name, we hope that these attempts for everyone to imagine together will continue in the future. 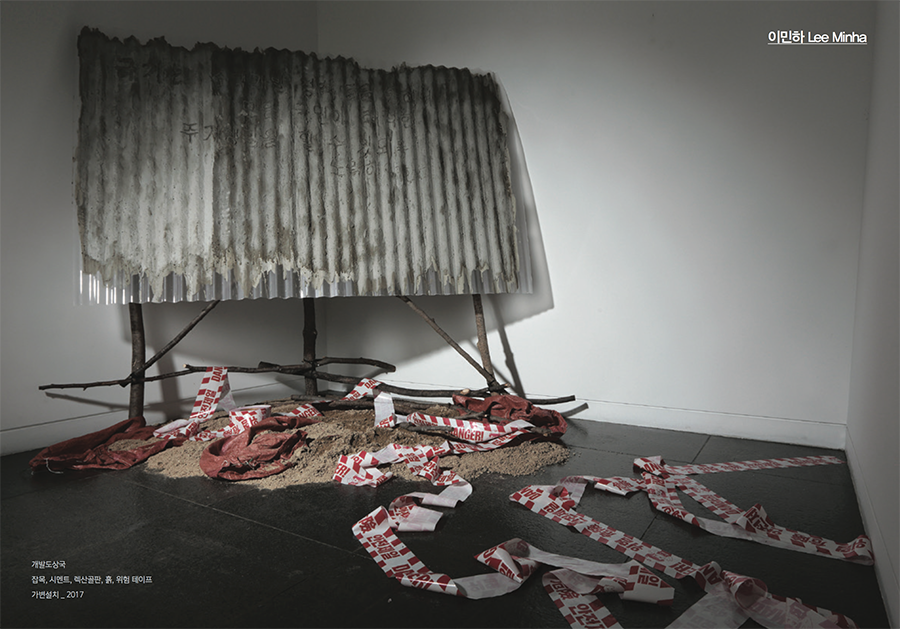 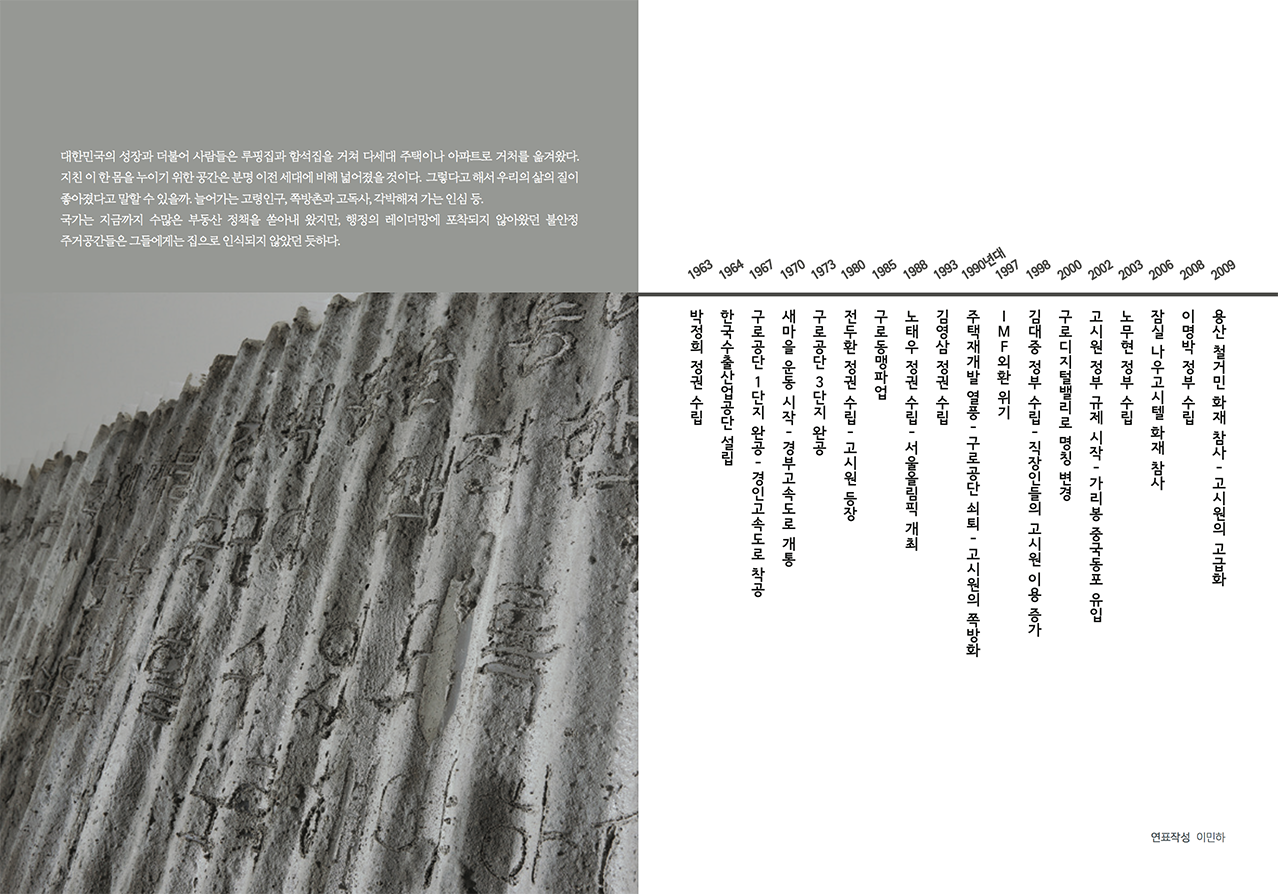 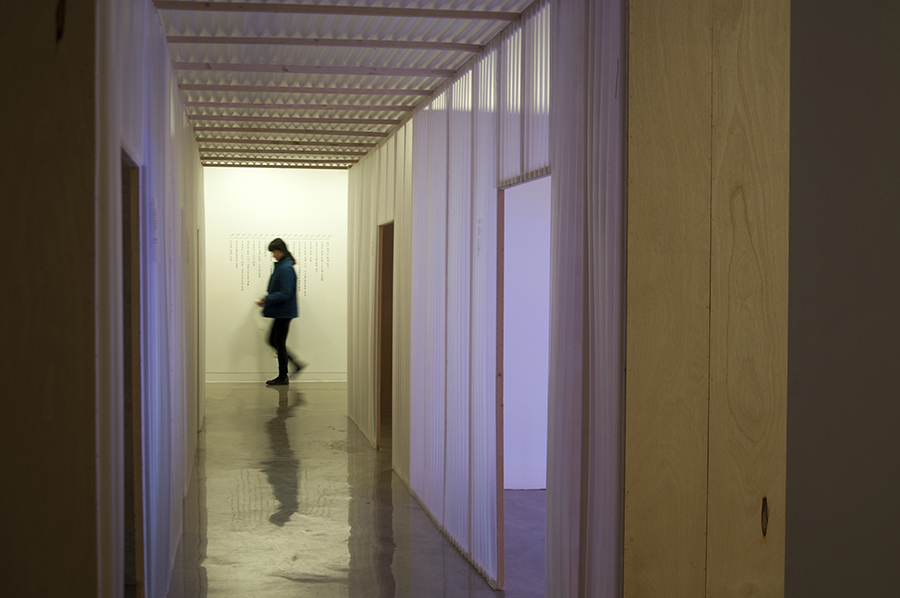 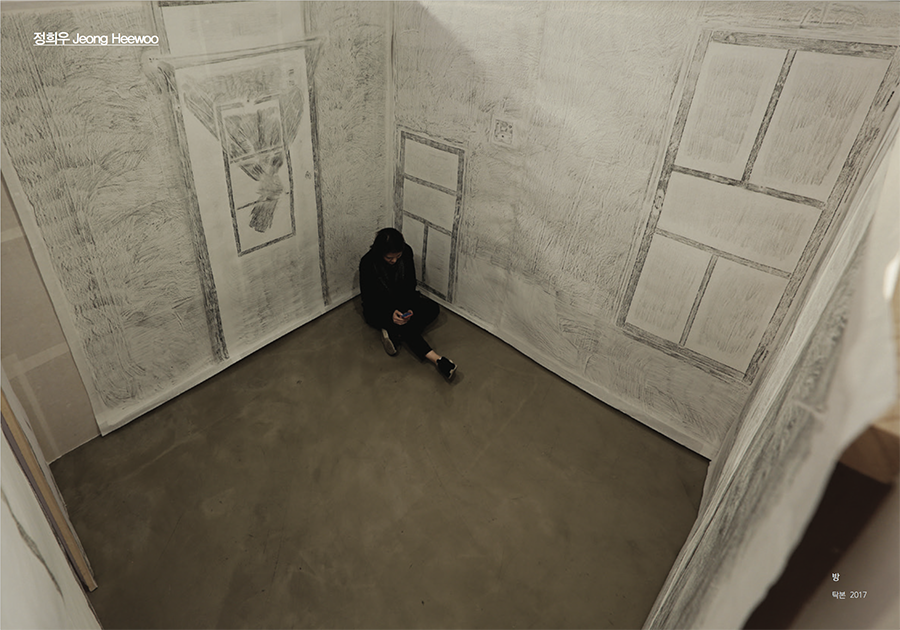 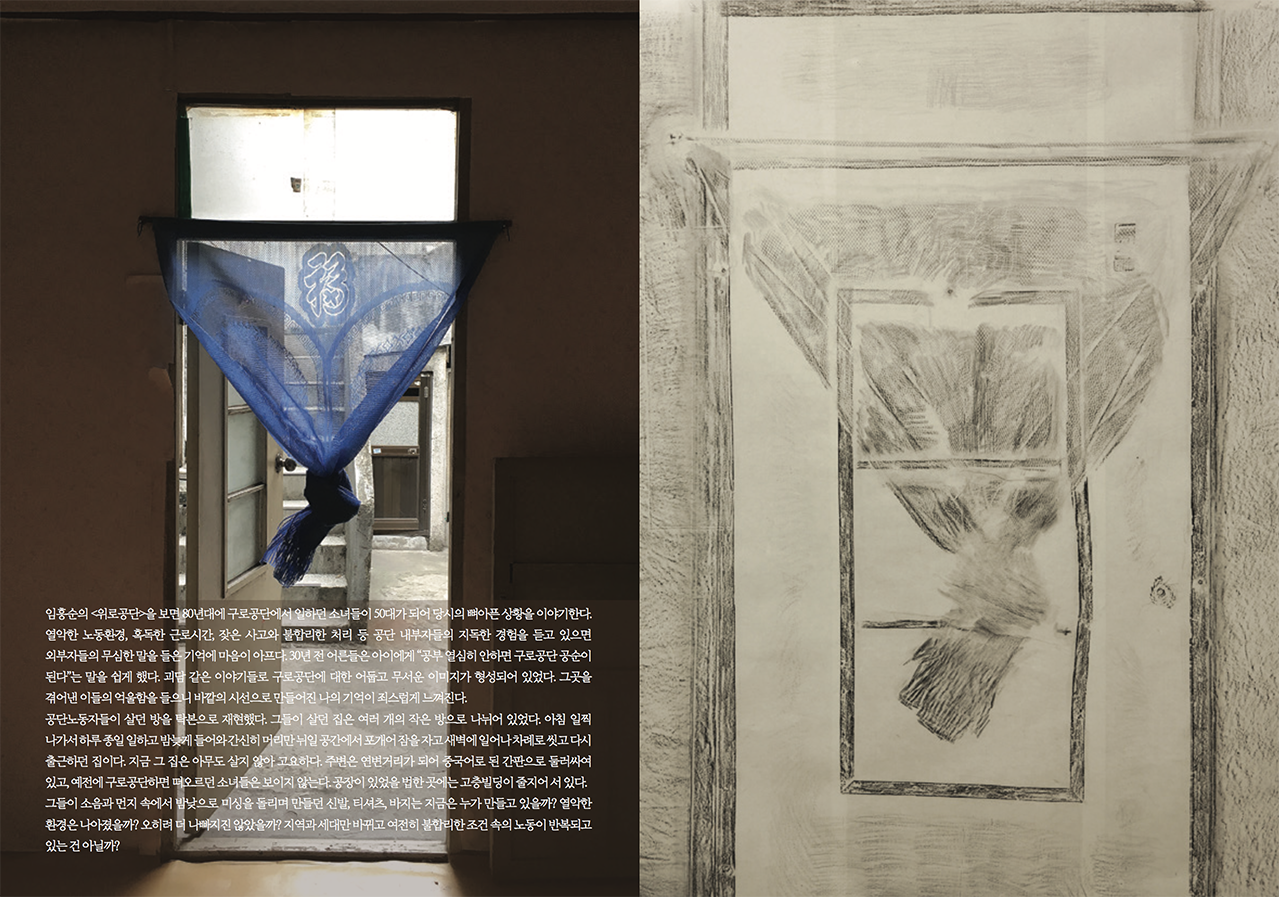 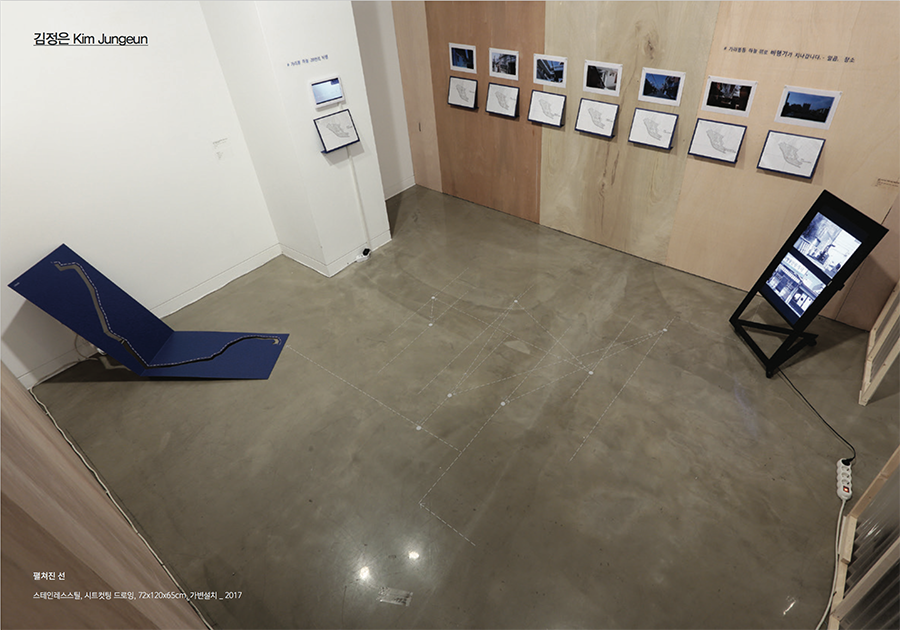 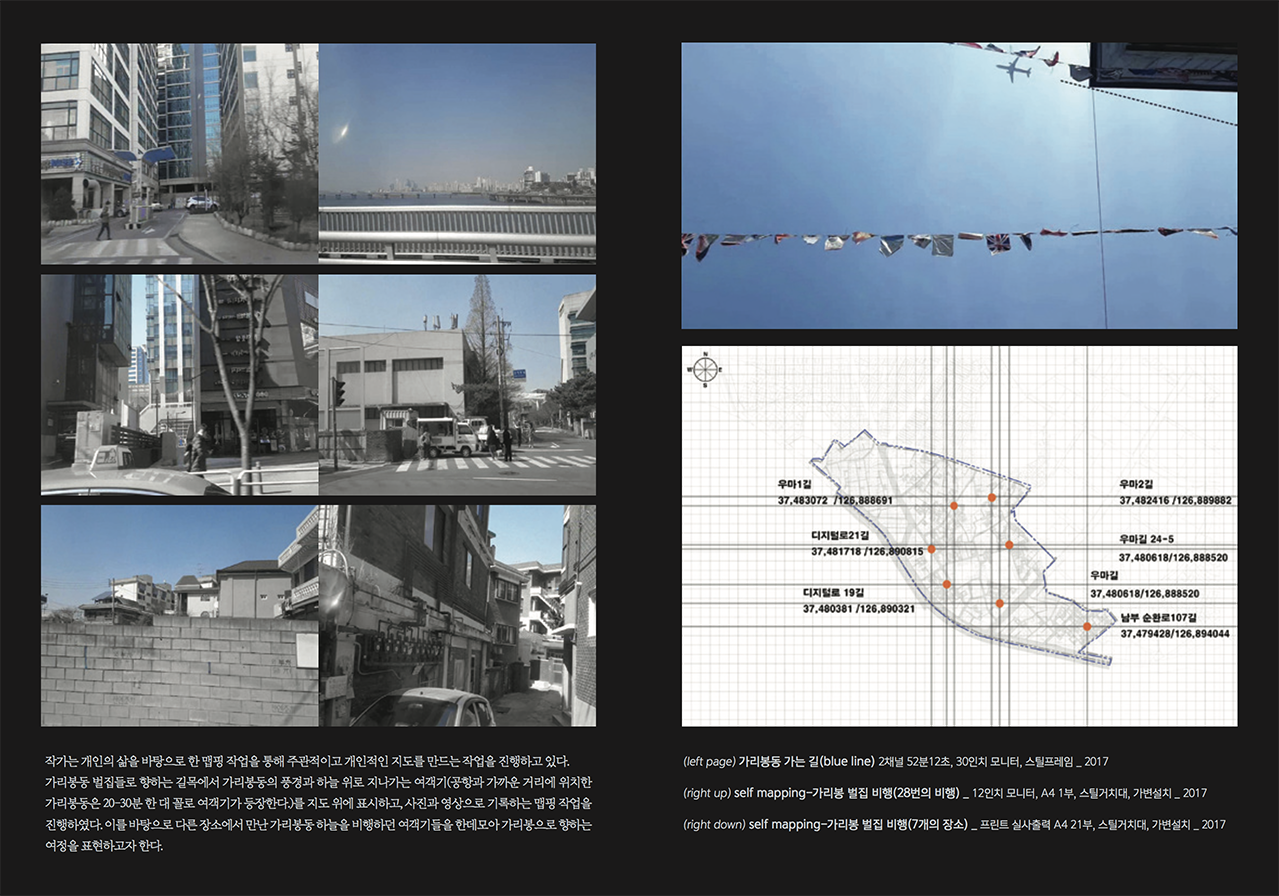 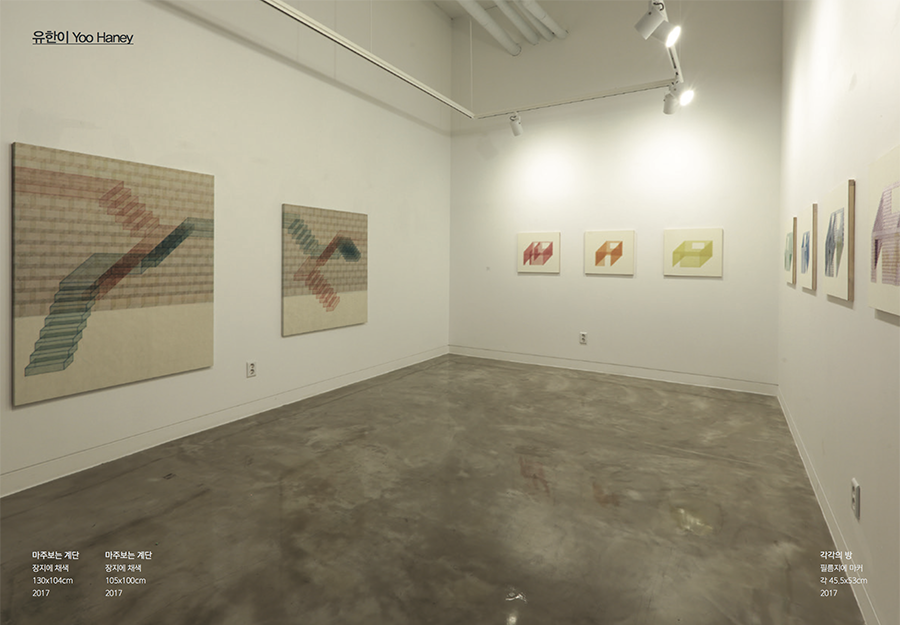 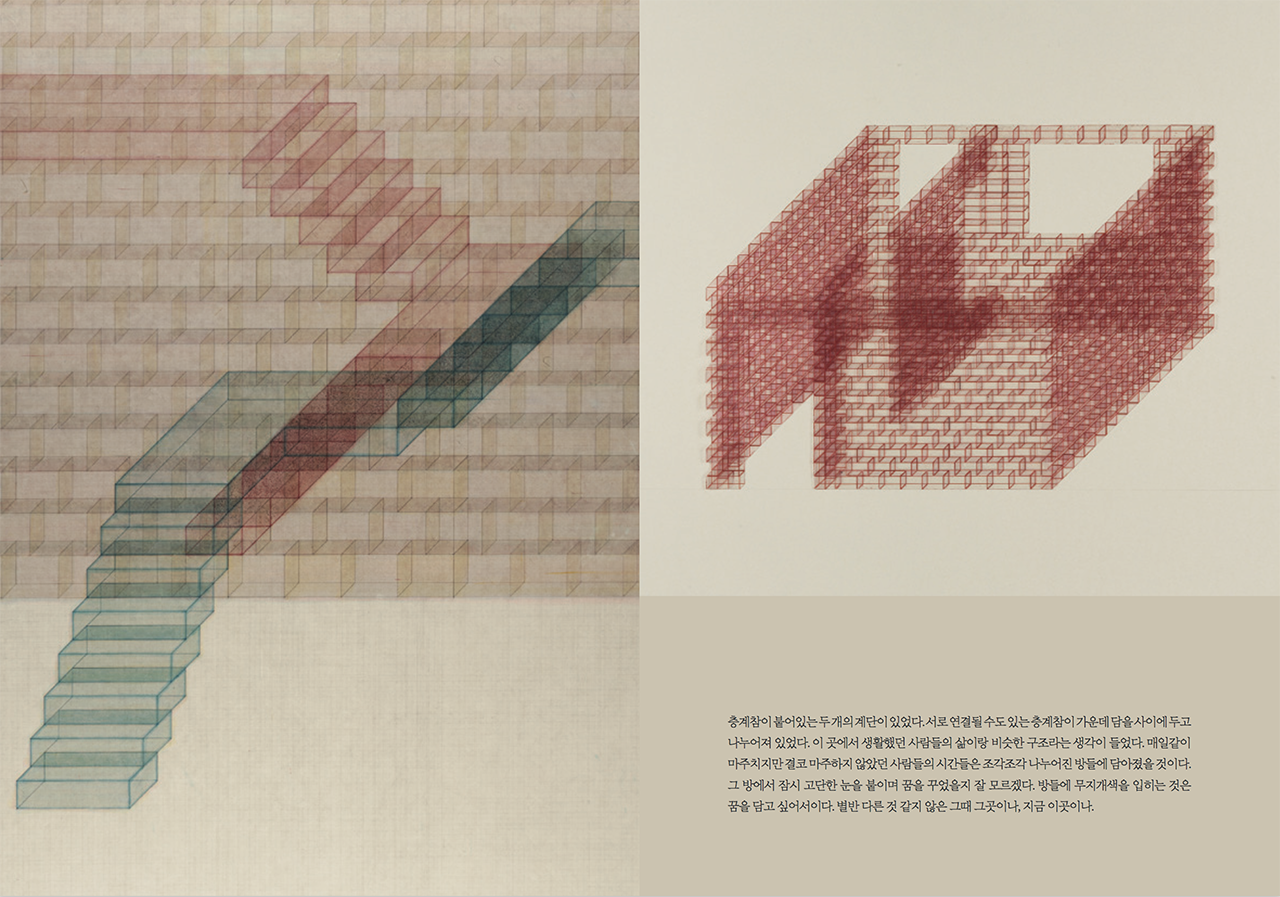 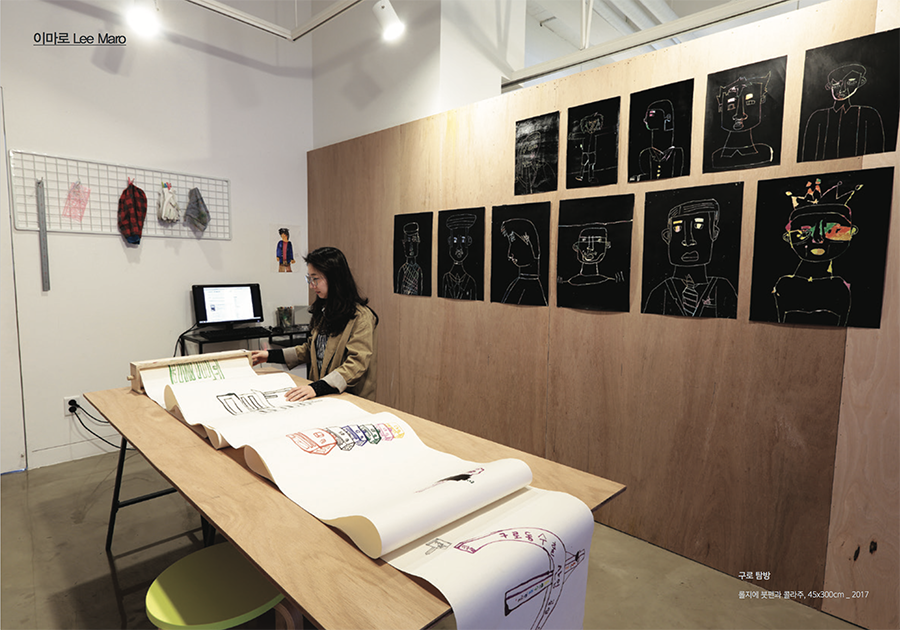 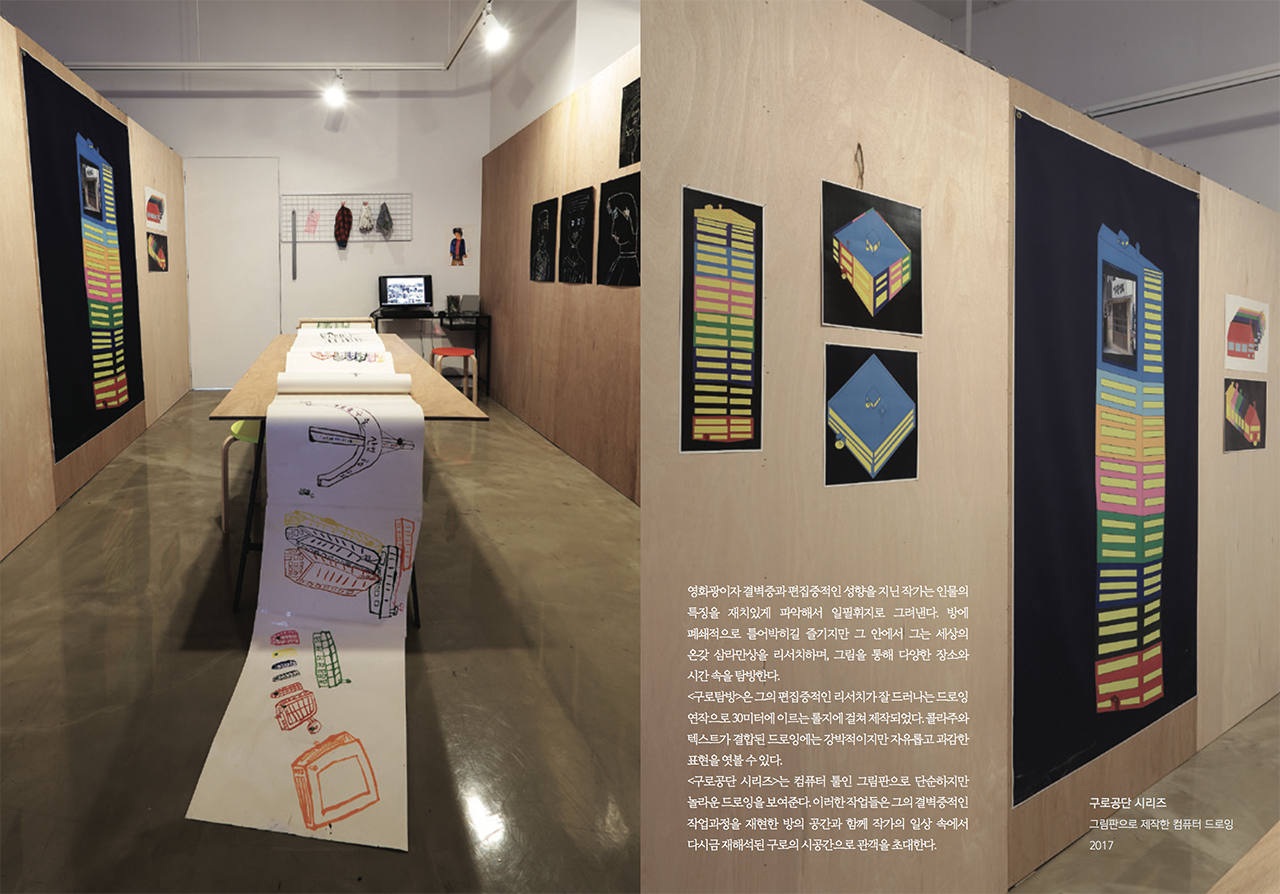 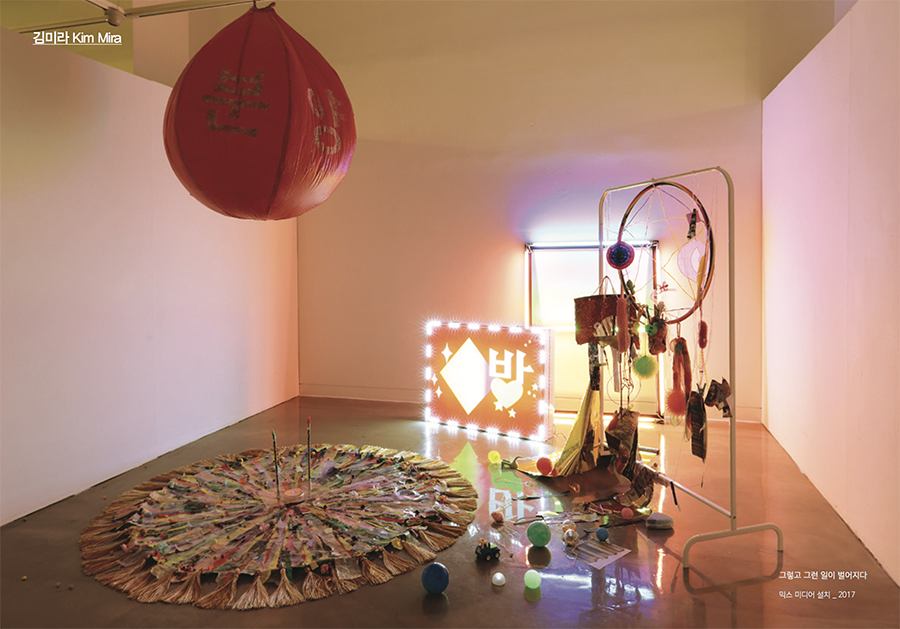 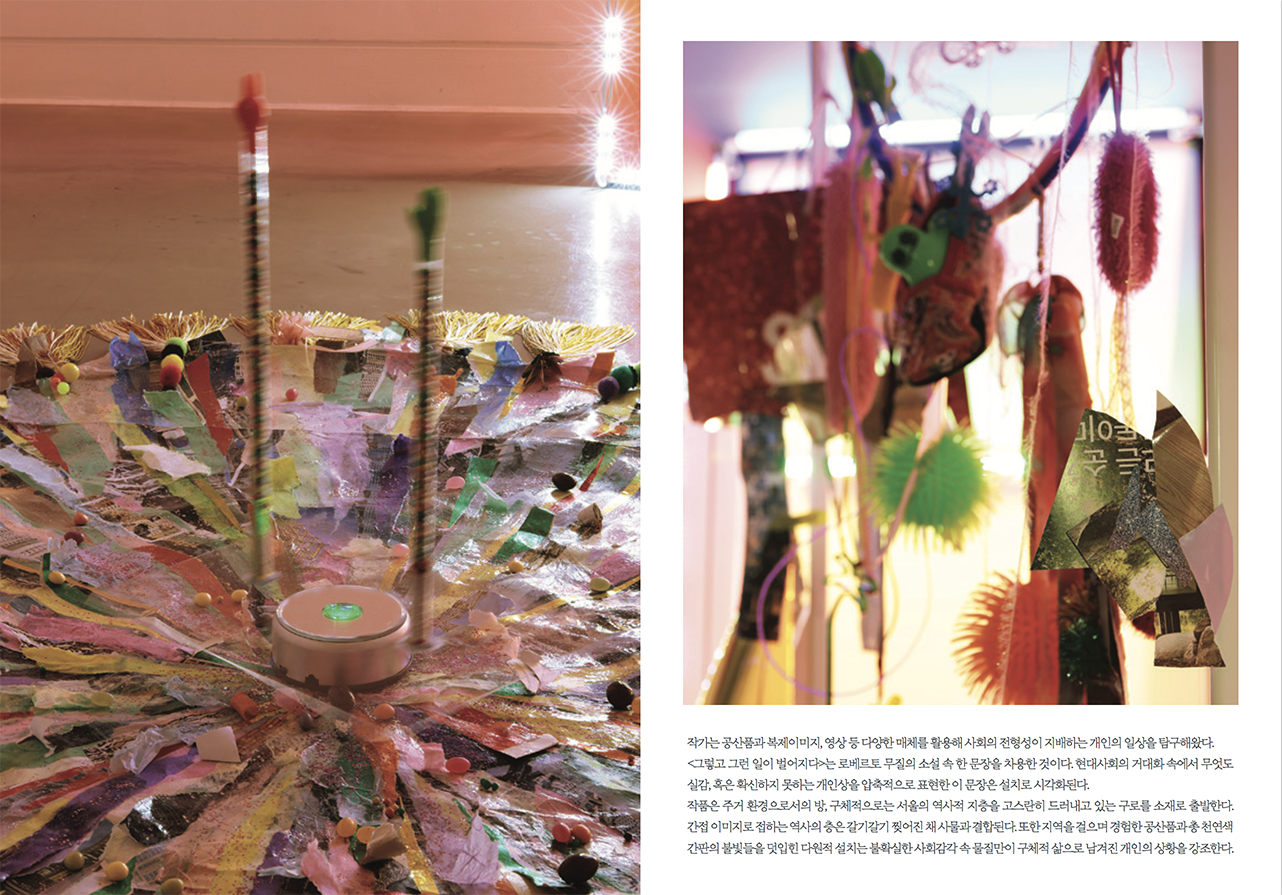 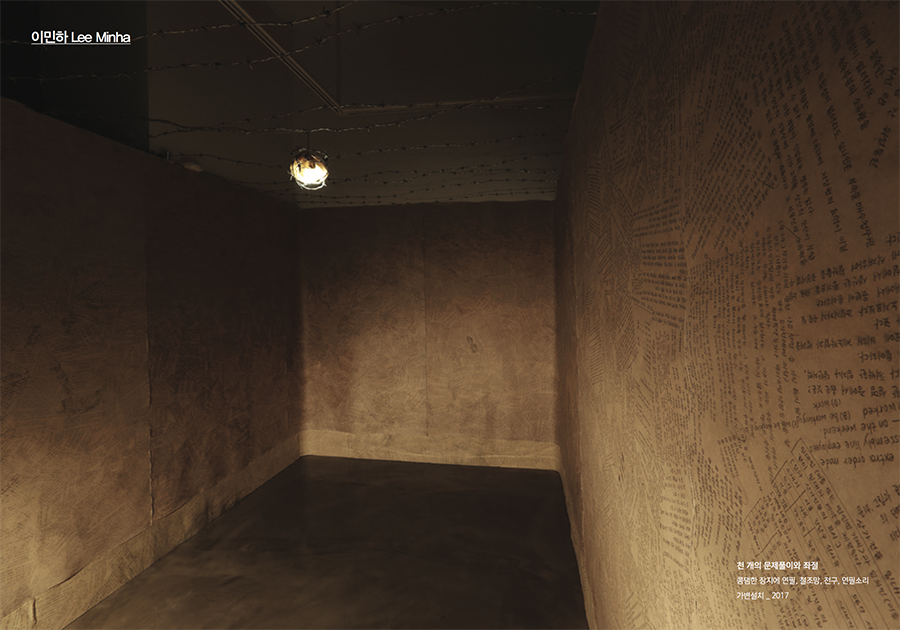 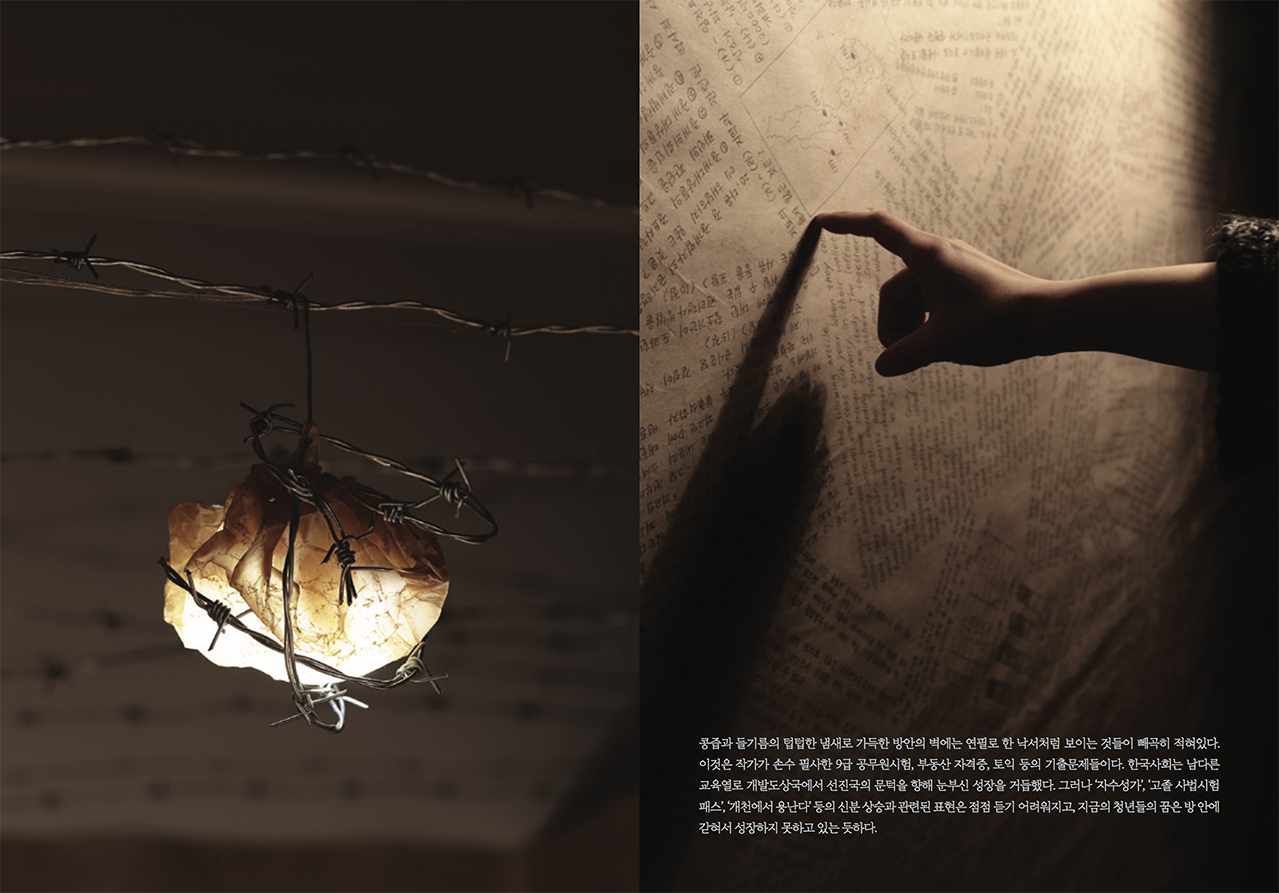 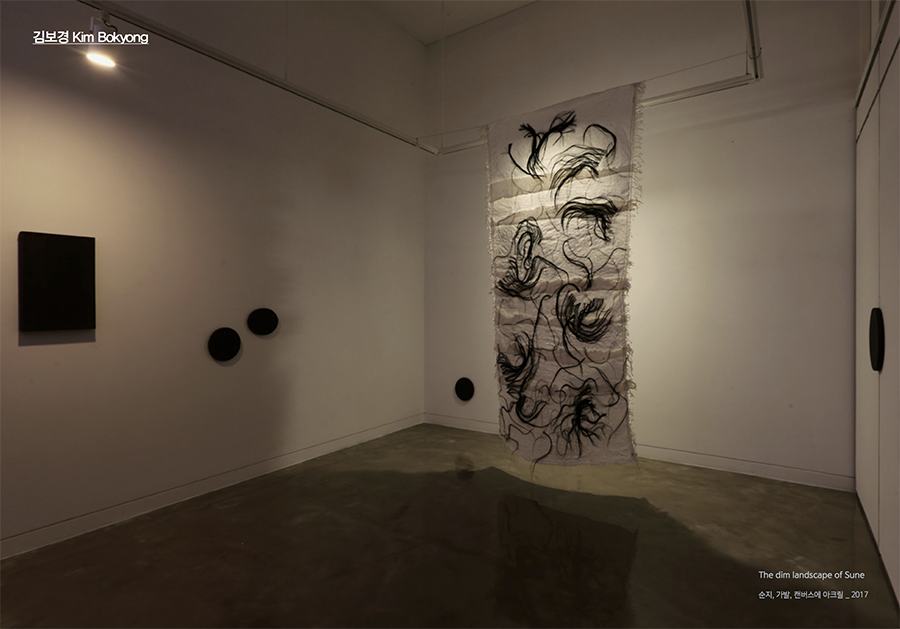 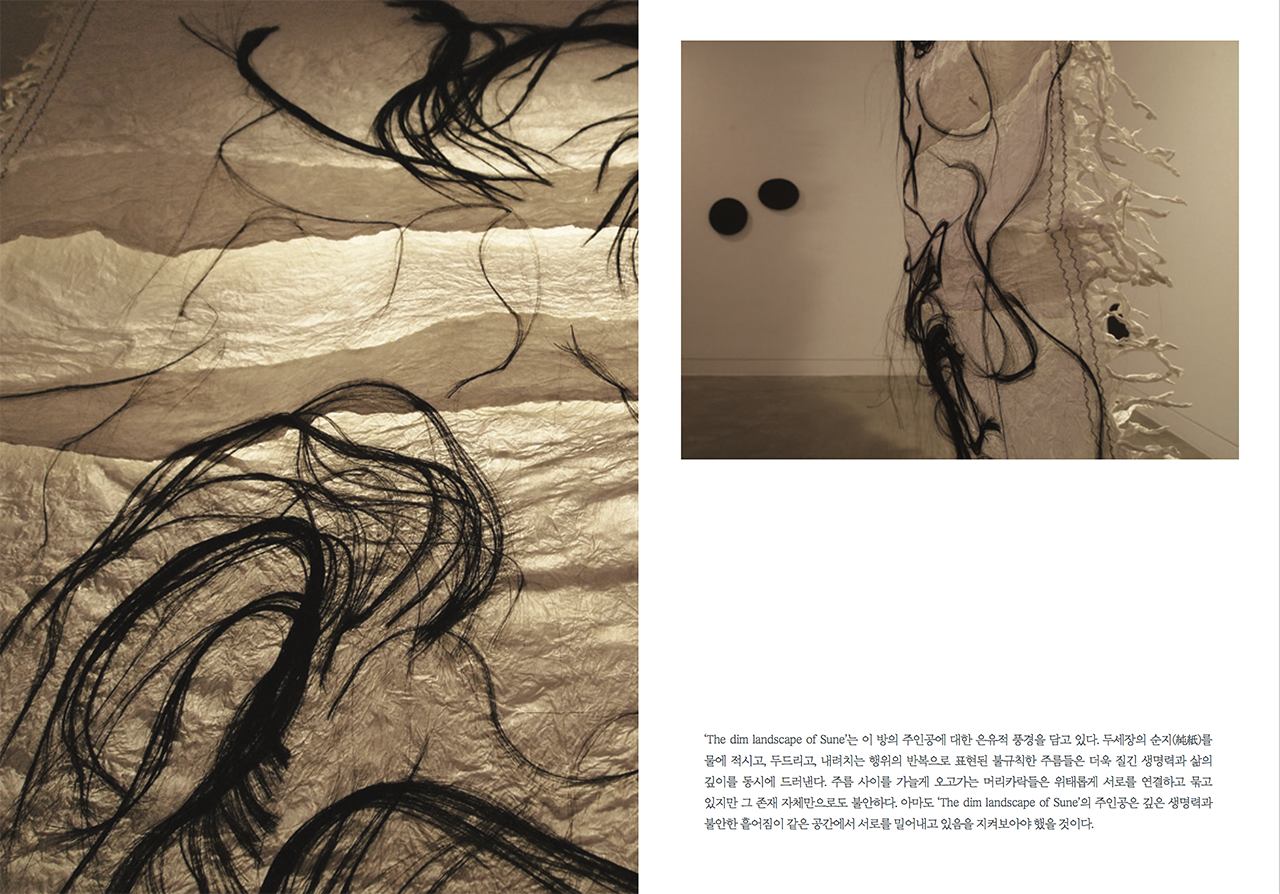 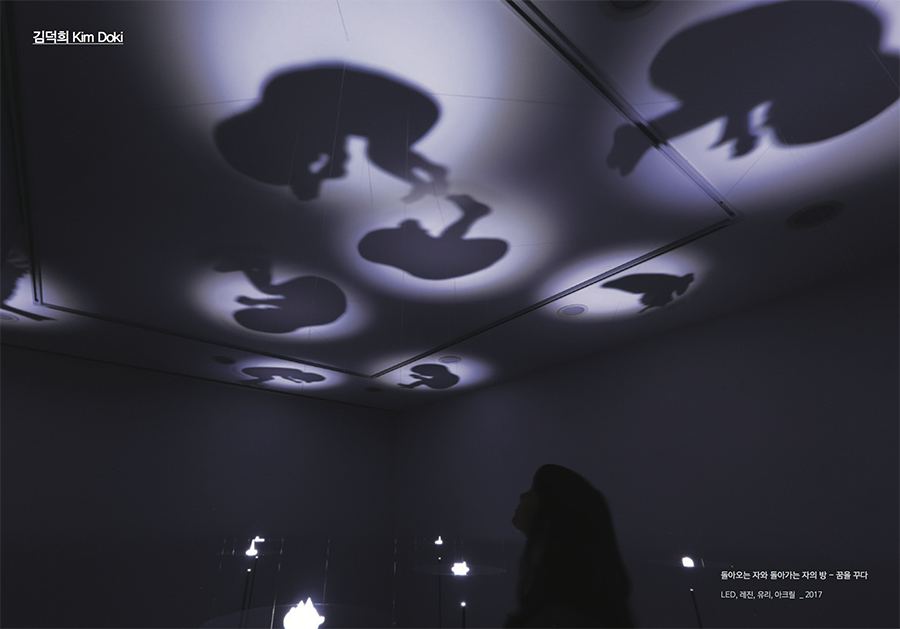 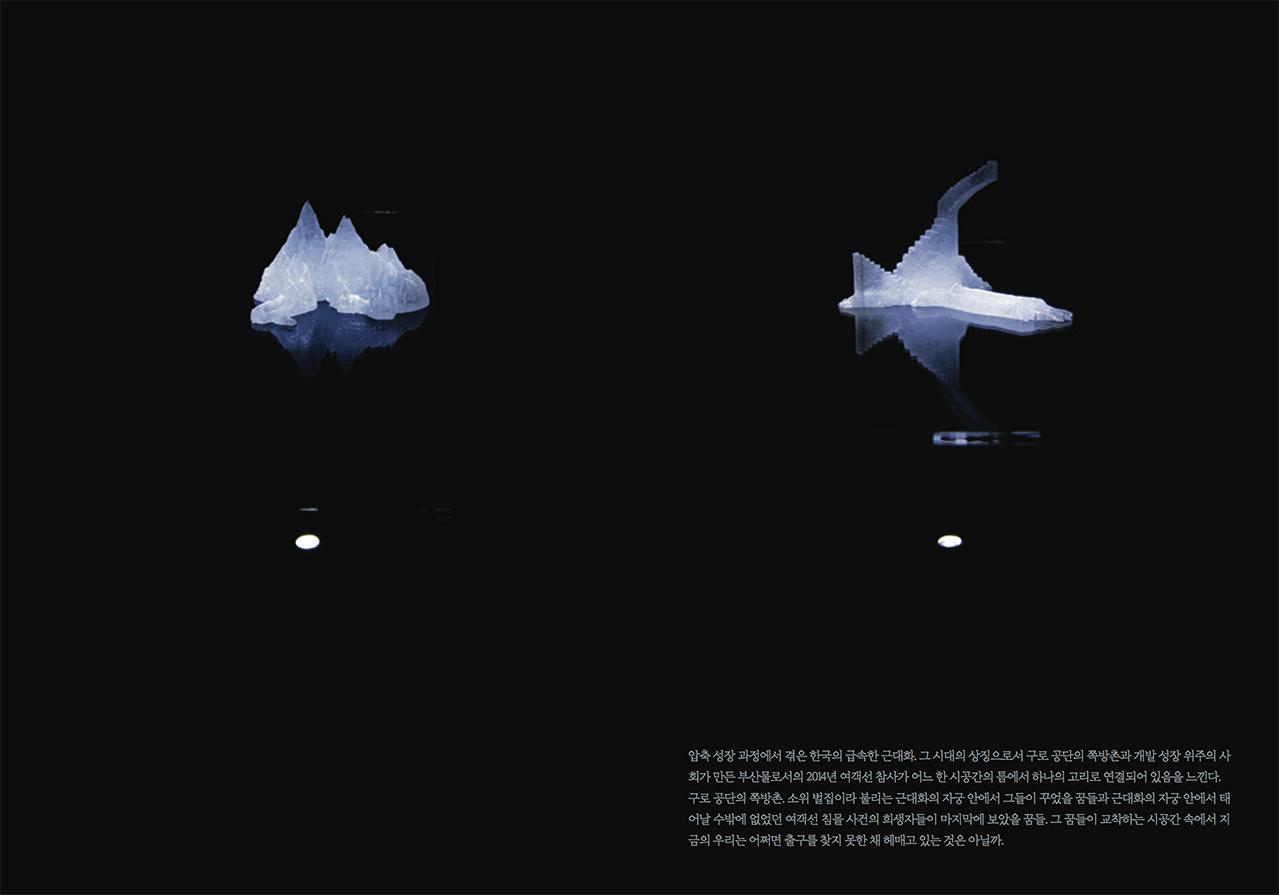